During the District 22 recall elections, Voces de la Frontera Action volunteers in Kenosha along with members from other ally organizations, like Jobs Now Wisconsin, canvassed and made phone calls to Latino residents urging them to vote. Those wards where voting-age Latinos made up 30% or more of the population, voted heavily for Wirch indicating Latino support for the democratic senator. There was a definite increase in the public awareness and participation in the recall elections, but when potential voters were questioned about their stance on the AZ copycat bill introduced in Wisconsin, a majority of people were unaware that such legislation existed in Wisconsin. A greater push to inform the public of the detrimental effects this will have on not just the immigrants in the state, but the community as a whole needs to be made.

Additionally, there is talk of creating YES! (Youth Empowered in the Struggle) chapters in universities and high schools in Kenosha. A meeting was held August 22nd, which included CUSH (Congregations United to Serve Humanity) president Sandy Milligan, YES! member Kennia Coronado, UW-Parkside students and Adela Lozano, staff at the UW-Parkside Multi-cultural Affairs office.  Jose Variable,a UW Parkside student who worked to bring these community members together, hopes to establish a YES! branch in Kenosha. Variable says “each day that goes by we are seeing our people being oppressed more and more and they don’t see the light. YES! could be that.” If you are interested in learning more contact Jose Varible at varible154@gmail.com. 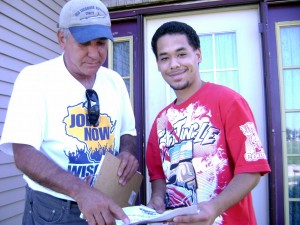 Volunteer, Herberto Figueroa, showing Kenosha resident the location of his polling place along with information needed to register.